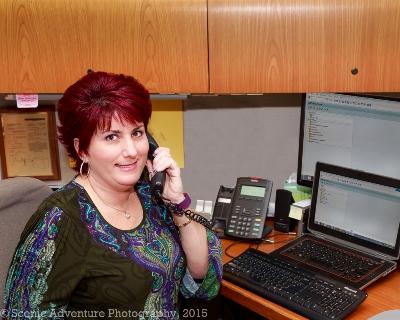 She's the lady next door you actually want to stop and talk to when you run into her because doing so leaves you a little happier than you were just before. As an Emergency Medical Technician and teacher, she lends her expertise, patience and time to train first responders to save lives in our community. Looking at her, she's the picture of health, nothing belies the port implanted in her chest wall for the treatments she receives every 3 weeks -- treatments made from the blood of a thousand donors.

Ronda Matarese of West Warwick, Rhode Island has primary immunodeficiency and receives intravenous immunoglobulin (also known as IGG or IVIG) infusions made from plasma of blood donors. IVIG is used to treat autoimmune and infectious diseases. After years of battling chronic upper respiratory infections, being on antibiotics and medications almost constantly, she sought the help of an allergist. When her blood work came back, she received a surprising call. "I never expect an allergist to say, 'you need to come in right away' or to be referred to a hematologist/oncologist for treatment."

What they learned is Ronda's immune system couldn't fight off certain infections properly, and that IVIG would hopefully compensate for the deficiencies in a way that would allow her to live a normal life out in the world without worrying about always getting sick. Finding out the treatment was made from donated blood, she says, "Surprised me because as an EMT, I thought I knew almost all the reasons people need blood. Something like this was never one of them, and then I learned how many donations it takes to make the treatment and had an even greater appreciation for the importance of people donating blood regularly."

"As an EMT, I thought I knew almost all the reasons people need blood. Something like this was never one of them, and then I learned how many blood donations it takes to make the treatment."

To make an average yearly dose of IVIG for patients who need it, it takes 250 liters of blood plasma. To make 1 liter of plasma, four whole blood donations are needed. The Rhode Island Blood Center participates in national blood resource sharing programs through Blood Centers of America (BCA). RIBC's President and CEO, Lawrence Smith, says, "RIBC donors provided approximately 8,000 liters of plasma shipped to companies through BCA last year. This plasma, which is made into IVIG, would have come from about 32,000 donations."

Ronda is going on her sixth year of treatment, and IVIG will be a lifelong process for her, at least until another effective treatment is found. Before IVIG, Ronda couldn't stay healthy and was missing out on a lot of things. Now she's got a full-time job, several part-time jobs and is involved in EMT training, a passion of hers.  "I've travelled to Germany, Canada, California and enjoyed every moment because I wasn't sick the whole time."  She encourages people who give blood to give as often as possible and for those who've never tried to start. They are the reason she's able to live her motto of, "I have a disease but the disease doesn't have me."