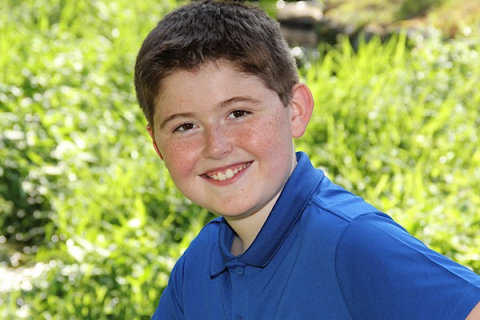 Blood donors often hear that one donation can help save three lives because their donation is made into transfusions of red cells, platelets and plasma. But have you ever stopped to think about how your donation can help three people in one family?

Eleven year old Kevin Boles from Bridgewater, MA, has an autoimmune disorder called hypogammaglobinemia. His body does not make enough antibodies to fight common infections, and the only thing that helps him do that is intravenous immunoglobulin (also known as IGG or IVIG) treatments, which are made from the plasma of about 1,000 blood donors.*

Kevin, his mom Cheryl, and dad Rick, each share their own perspective on how Kevin's treatments make their lives better.

1. What was it like before you had the treatment you needed?

Kevin:  I was always in pain and I needed help doing pretty much everything. I also wasn't able to play as much as the other kids my age. I was tired all the time and wasn't able to be active.

Mom:  Kevin was always in terrible pain and constantly exhausted. He spent an entire summer just wanting to lay on the couch because he felt so bad. It was terrible watching him! He didn't have the energy to just be a kid. Then, once the school year started he struggled to get through the day.

Dad:  Sinus infections, pneumonia, bronchitis, abdominal pain, cellulitis, headaches and being run down all the time were “the norm” for Kevin.  He was missing a bunch of school days and felt different from the other kids.  It broke our hearts as parents to see our little boy so sad and suffering without any solution.

2. How does getting the transfusions make a difference?

Kevin:  I am more active and a lot less tired. I am able to do more activities because I do not have as much pain.

Mom:  The treatments make a big difference for him. For the first two weeks after treatment he is like a typical kid-wanting to go out and play, have friends over, etc. He also isn't as tired and doesn't have constant pain. The IVIG gives his body strength to fight illness better than he did before he had the treatment.

Dad:  Now, when we play soccer, I get tired before he does, which is the way it should be.  He missed half as much school as the year before, and smiling and laughing are “the norm.”

3. How do you feel about blood donors?

Kevin:  I feel that blood donors are great people for donating their blood to help others live better and longer lives. I would like to say thank you for helping people like me!

Mom:  I feel blood donors are amazing people! They take time to donate a part of themselves to help others live healthier lives. I see firsthand how it helps my son every day. I am so grateful for their donations!

4. What do you like to do while you're getting the treatments?

Kevin:  Sometimes I fall asleep. Other times I play video games with my brothers, Johnny and Nick.

5. What would you say to someone who might be afraid to try donating blood?

Kevin:  It is a quick poke, and it can help millions of people lives like they are supposed to.

Mom:  I would tell them to think of the kids like Kevin who get infusions every 2-3 weeks. My husband had a fear of needles, but because of Kevin, he pushed himself to go the blood center and donate. If my husband can get over his fear, they can too!

Dad:  I was afraid to donate. I had a bad experience in the past. Once I heard that the infusions Kevin was receiving were created from the blood of 1,000 donors*, I couldn’t just sit back and let someone else do it anymore.  I told the staff at the Rhode Island Blood Center my fears, and they totally understood and were awesome about it.  Now I donate as often as I can….for Kevin and for anyone who needs it.

Kevin's transfusions take between four to five hours to receive. The one hour of your time it takes to give blood not only helps save three people, it helps better the lives of their loved ones as well.

*To make an average yearly dose of IVIG for patients who need it, it takes 250 liters of blood plasma. To make 1 liter of plasma, four whole blood donations are needed. The Rhode Island Blood Center (RIBC) participates in national blood resource sharing programs through Blood Centers of America. RIBC's President and CEO, Lawrence Smith, says, "RIBC donors provided approximately 8,000 liters of plasma shipped to companies through BCA last year. This plasma, which is made into IVIG, would have come from about 32,000 whole blood donations.