Life Is Good Thanks to Blood Donors 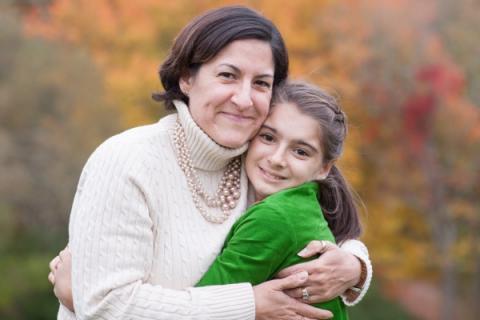 Kelly Guay's focus is on her 13-year-old daughter Joni, who began showing signs of low blood counts in 2009. After years of seeing specialists to understand why, doctors at Hasbro Children's Hospital diagnosed Joni with aplastic anemia. Kelly explains, "Joni's immune system basically attacks the platelets made by her bone marrow, and her red cells never fully mature."

Joni's doctors have tried various treatments, which have not helped. The one thing that has worked for the past five years are weekly platelet and monthly red cell transfusions. Platelets allow Joni's blood to clot so she doesn't hemorrhage from nose bleeds or bumps and bruises. Without them, Joni would not be able to regularly and safely participate in what brings her the most joy -- competitive gymnastics. Even with them, she needs red cell transfusions now and then because something as simple as a nose bleed can last for hours.

Joni's mom Kelly is much too familiar with spending time in hospitals. She has lost her mom, two brothers and most recently an uncle she was very close with to blood disorders. While doctors do not think the different disorders are hereditary, they believe there may be genetic vulnerability that is triggered in each one by various unrelated environmental factors. Bobby, Kelly's husband and dad to their four children Joni, Hanna, Brody and Maddox, was diagnosed with late stage stomach cancer and died last year at 37 years old.

Every one of them needed blood transfusions. While they did not survive, Kelly is able to see every donation as a blessing. She says, "Blood helped their quality of life. It gave us more time together. It gave my husband and me more time to have the difficult conversations we had to...about our children and what he wanted for us." Today, they are doing what Bobby wanted for them. "We're living everyday to the fullest," says Kelly. We come to Hasbro once a week so Joni can receive blood at the Tomorrow Fund Clinic. We look in to new treatments with her doctors. And I still have my daughter who is happy and able to do what she loves because of blood donors."

Joni may need a stem cell transplant in the future, but Kelly has a lot of questions about the risks before she can even consider it. If she does need one, they hope for a perfect match. In addition to scheduling an appointment to donate platelets, you can register to be someone's life-saving bone marrow match right here online.

August 2019 Update: Joni continues to live her best life thanks to blood and platelet donors. Transfusions continue to be the treatment that works best for her for now, and she's able to do all the things she wants to do in life because of them.