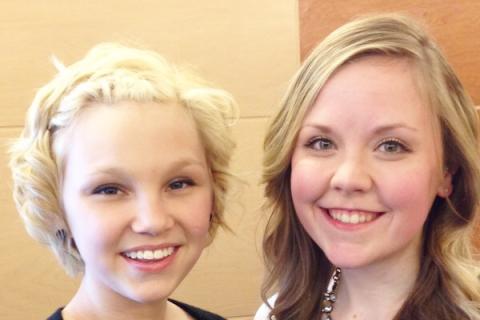 Seventeen-year-old Wesley Thornburg was diagnosed with Acute Lymphoblastic Leukemia (ALL) when she was eight years old in 2006. Years of treatment followed.

Wesley, who lives in Dallas in Gaston County, says her life was finally saved by a bone marrow transplant in February, 2014.

Wesley's mom, Gina Thornburg, said the transplant worked because it was one of the rarest and most perfect matches doctors told her they'd seen. A 10-out-of-10 match, a one-in-a-million type situation.

“It's just really wild,” Gina said. “To find someone in America, about her same age, as a perfect match in another state… it's a God thing. It's an amazing thing.”

The way the donor system works is that recipient and donor can't know anything about each other for a year. This past February, on the year anniversary, Wesley was still interested in getting to know her donor better.

She asked the program to pass along her information.

Days later Wesley got a phone call from a girl in Massachusetts. Her name was Michaela Loynd. She was the mysterious donor.

Michaela and Wesley talked on the phone for a few weeks and on March 6, they met in person in a Winston Salem hotel lobby surrounded by family and friends.

WBTV was along to witness the emotional connection.

It needed few words. The intense hug and silent tears spoke volumes. You can see it all in the attached video story.

“She saved my life,” said Wesley. “We are blood sisters for eternity.”